A top staffer for Senator Lamar Alexander, a Tennessee Republican andchairman of the Senate education committee, said Monday that the senator wants to pass a reauthorization of the Higher Education Act before Christmas. 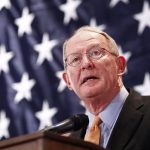 David Cleary, Alexander’s chief of staff, made the comments at an event hosted by the Education Writers Association.

In January 2018, Alexander offered a similarly ambitious timeline, saying he wanted his committee to mark up HEA legislation by April. But after multiple hearings focused on higher education, the Senate never made progress on crafting a bill last year.